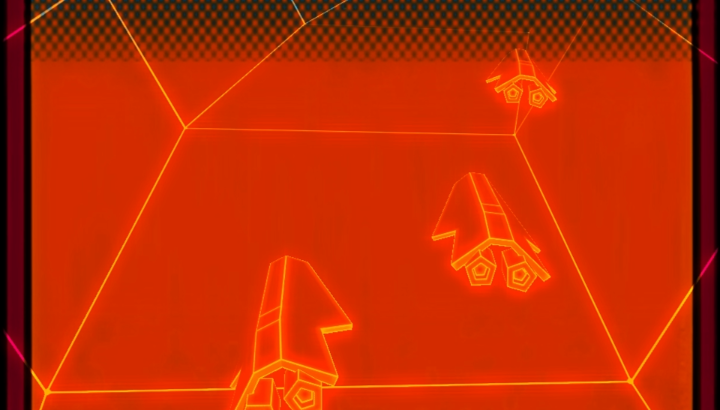 The TigSource internet forum, created and driven by Derek Yu (the co-creator of Aquaria and Spelunky), is a place of abundanct creation of independent games, predating the boost of the “indie” market as it exists today on Marketplaces such as the Apple Store, Google Play or Valve Steam. Thanks to the incentive of Derek Yu, one-month programming competitions were organized on a large variety of themes. These events were an opportunity for me to try out the design and implementation of game mechanics as well as doing graphic research of the most appropriate visual rendering. This page shows the prototypes of games on which I have conducted experiments both on development techniques and graphic rendering, matching the creative constraints inspired by the TigSource community.

Demake is a portmanteau, as the contraction of degradation ad remake. It is a reinterpretation of an existing game on a plateform that is technically inferior, thus causing important visual and gameplay changes. To add up some challenge, the idea of bootleg brings up the possibility to imagine what the game would look like subtle changes where made in order to avoid any copyright infringement.

For this competition, I tried to imagine what the Wipe Out (Psygnosis / Sony Europe) video game would look like if it had been developed on the Vectrex console.

The Vectrex
This console had important features that totally shaped the gaming experience it provided:

The graphics
Despite it doesn’t run at all on the the real Vectrex console (the development leadtime and the technical investment would probably have taken me several years to master such a machine) I tried to give the game the visual look & feel that it would have had on a CRT with limited capabilities. Thus, everything in VipeÜt is drawn as vectors and is seen through a simulated overlay similar to the ones that came with the games. The overlay reinforced the impression of depth and brought color to the monochrome display of a Vectrex.
The phosphorescent rendering of the cathode ray tube has been reproduced using a bloom post-process provided by the nEngine framework (predating harfang3d), by varying the intensity to reproduce the flickering inherent in the display technology of the console (tracing hundreds of segments each 1/60 of second on a high-remanence screen). The virtual overlay colorful filtering and opaque marking mix was implemented by a GLSL post-process.

Audio
The Vectrex ships with the infamous Yamaha synthesizer that was found in most of the computers and consoles released during the 1980s (except the Amiga :). I was lucky to be able to borrow the super catchy theme that Christophe ‘Rez’ Resigné had just composed using a Nintendo Gameboy, that also comes with the same type of Yamaha chip. The rest of the sound effects were made using SFXR plus some genuine white noise that I recorded by putting a microphone near the real console. All this contributed to the impression of an analog rendering.

Gameplay
No matter if the original WipeOut had a 3D gameplay with a physics engine, to limit the complexity of the project and stay as close as possible to the capabilities of the Vectrex, I decided to reinterpret the race by keeping the 3 dimensions of the display while limiting the evolution of the vessel to 2 dimensions. The obstacles on the route are spread on 4 separate lanes on which the player must navigate by the left/right keys to maintain his speed. Several types of options will randomly pop on the track, as a reference to the original game (speed up, autopilot, power up).

Thématique : Cockpit Compo (“make a game in subjective view from inside the vehicle/ship/vessel…”)

This theme was inspired by 90’s video games such as the Midwinter series (Atari ST, Amiga) where the outside environment was seen through the mask of a polar suit or the windshield of a jetski. You can find this graphic principle even today, in more recent games, like MKD during the shooting stages. This specific layout created a feeling of confinement and was perfetcly suited to 4×3 monitors or TVs.

The game
I deciced to transport the player onto the deck of a 17th century ship. Unlike the cockpit games of the late 80s, the vehicle is fully rendered in 3D whereas the surrounding scenery is rendered using a fake 2.5D effect, inspired by a theater stage. The ship thus remains in the center of a wave animation, moving in concentric circles whose oscillatory rotation gives the illusion of the swell.

Theme: The Commonplace Book, H. P. Lovecraft (create a game taking one of the ideas from this book as a starting point)

The The Lovecraft Commonplace Book keep tracks of the ideas, impressions, or images ordered by the author under numbered entry forms. For this competition, I selected the entry number 5.

The game
For this gameplay , I chose to immerse the main character (“the narrator”) in an environment that would be entirely ruled by a physical engine. If the player has no direct control of the main character, his task is to facilitate the progression along a course (“unfamiliar country road”) with deadly obstacles. The player, by interacting with certain elements of the environment, can move them or make them disappear. The usage of physics is a major challenge in terms of character control (we can only act indirectly on the velocity of moving objects) and because as soon as a coherent set has been put in place the interactions between each elements of gameplay happen autonomously.

Visual parti pris
To translate the feeling of an inevitable situation, I was inspired by a musical interpretation of Erlkönig for trumpet in B flat major, narrator and piano, by Michael T. OTTO. Although not directly related to the idea quoted by the Commonplace Book, the mythology of the Erlkönig carries a universe from which I could draw a strong graphic principle of shadows, both simple and adapted in the very short development cycle imposed by the TigSource competition.

Theme: A game by its cover (from a collection of imaginary NES game cartridges)

Famicase
Since 2005, the Japanese shop known as Meteor.com organizes every year the Famicase Exhibition, of imaginary game cartridges, in NES format. These physical works are imagined and realized by a variety of artists without any actual game or ROM inside the shells. In 2010, the organizers of TigSource proposed to the community to create some of these imaginary games as part of a competition. 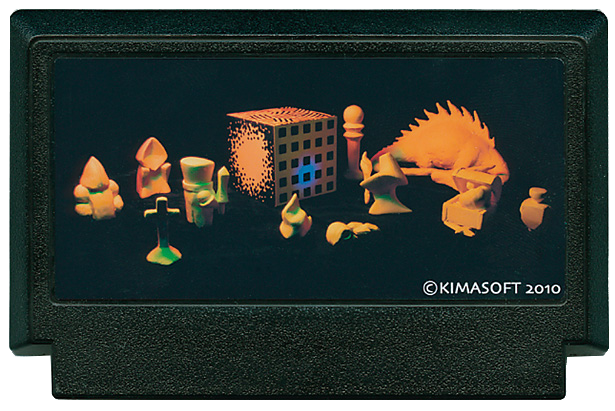 Graphical Universe
Although very enigmatic, the illustration of the chosen cartridge gave very precise graphical tracks. The majority of my graphic research has focused on reproducing a rendering in modeling clay that can react properly to the lighting available in a real-time 3D engine. I reproduced the coarse-looking material from a scan of a large plate of modeling clay, which I applied after several passes of transformations on 3D models passed to the decimator polygonal to give them an irregular finish. The almost abstract side of this Famicase allowed me to work the form first while looking for what shape the game might have.

gameplay
By aligning the blocks and other 3D elements created from the Famicase and testing various configurations, I returned to a quasi-isometric representation close to Metro-Cross, a 1985 NAMCO classic. Metro- Cross proposes a race in a straight line on a ground strewn with obstacles more or less penalizing, with controls 2D. It is a game mechanics whose bases are simple enough to implement within the one-month deadline imposed by the competition.

Director
For this competition, I worked in pairs with Emmanuel Julien (lead dev on the engine used as well as on Harfang3D ). Emmanuel took care of all the implementation of the game, from one of my first models. He made the character’s controls playable and designed the levels that make up the game.
Meanwhile, I was able to focus on the visual part and prepare enough graphics to keep the game alive throughout the 7 levels.
Towards the end of the month, the development of the game, Ryan Hagen , 3D animator, joined us to give life to the main character. I made the connection between Ryan and Emmanuel, integrating animations made under Maya graphic pipeline of our game.

The result gives a complete mini-game of 7 levels. Players who reach the end are rewarded with an end screen. The game was published on GameJolt and has been downloaded approximately 800 times.