Global Game Jam Paris 2011 is now over. It took place at ISART, School of video game, digital art & design. The place is great, the organizers brought a perfect support. The Jammers were amazing.

The GGJ Concept really brings a full cycle of the life of a video game. It’s definitely the best concept of game jam I’ve ever tried (compared to Demoscene events or TigJams, for ex.)

A few notes for my next jams

(and for any future jammers I guess)

1. Prepare a file-exchange solution :
You never know what kind of network environment you will meet in a Jam. I’ve done jams with an almost un-existant network support (cybercafé with overloaded wifi). Most of the time, you will have some network ports unavailable, especially those for SVN, Remote Admin, Unity Asset Server…
In that case, with such an hostile network support, how are you gonna exchange files rapidly, including multiple revisions, with your team ?
At the GGJParis 2011, we found out that DropBox was a rather good solution.
Preparing a small laptop that will serve as version/asset server can be handy as well, depending how much stuff you can carry with you.

2. Know your effing tool
If you’re going to create a game in such a short timespan, and embark a whole team with you, you’d better know your tool(s), your pipeline and their technical pitfalls.
During the making of a game, each time an idea arises, ask yourself : “have I already done this with my tool/language ? have I already succeeded ?”.
If it turns out that you never really tried to create an AI, code a level logic, setup a GUI, import a full rigged character into your engine, it’s rather unlikely that you’ll be able to do this during a jam, in a timely manner. And even if you do, it might spoil all your precious time, and you won’t have any left to think about/work on your game design.

3. Prepare your computer
Don’t arrive at a Jam with a PC that “just” needs a “quick reinstall”. Reinstalling Windows usually take a few hours, for you will have to hunt for the proper network driver, the right Redist, the latest Nvidia driver, and then make sure your tools work properly. It may only take a 2 or 3 hours, that’s A LOT in a 48h game jam 🙂

4. Bullet proof your engine
You wrote your personal 3D engine yourself. You’ve tested every part of it at least once and you know it will work. But have you tested all the features altogether in a single project ?
It sometime happens that using several features of an engine suddenly shows a loads of side effects and … bugs. And a game jam is not exactly the right place do debug your engine, especially a C++ engine 🙂

5. Talk pipeline/workflow before
If you are about to choose a team to work with, it might be wise, before embarking everyone on the same boat, to check that your workflow habits, and pipeline knowledge are compatible … unless you want to learn a completely know workflow during the Jam 🙂
However, I’ve met some guys who never worked together before, and they managed to bullet proof a common 3D pipeline and finish a proper game within 48h !

My personal hierarchy of coolness

I’ve done a few events during the past years. Among them :

Demoparty
I’ve probably been to half a dozen of demoparties, between 1995 and 2005. Demoparties are cool, but most un-structured. You work on the kind of production you want (non interactive demo, usually), on the theme you’ve chosen, within a totally free timeframe (several years to a few hours).
Too much liberty ends up in something that became way too unstructured for my own amusement. I found out that 64k demos, with far more constraints, can be much beautiful and fun to do and watch.

GameJam
I recently found, a TigJam Berlin 2009, that GameJams can be more interesting than demoparty, for the very reason that if you game is not FUN, you will know it RIGHT AWAY 🙂

GlobalGameJam
GGJ might be the ultimate achievement for me, because the whole event is really and wisely structured. The GGJ 2011 was a really intense experience to me, and I learned on many levels (technical, social …) so much more during 48h than all I could remember of my past years of demopartying.

What is this Shader Tree thing all about ?

Since its first beta release, GameStart came with an internal abstraction to handle materials (aka shaders). One of the major improvements of the latest release (namely GS Beta 6) is the ability to edit & create a shader with a comprehensive and visual editor. 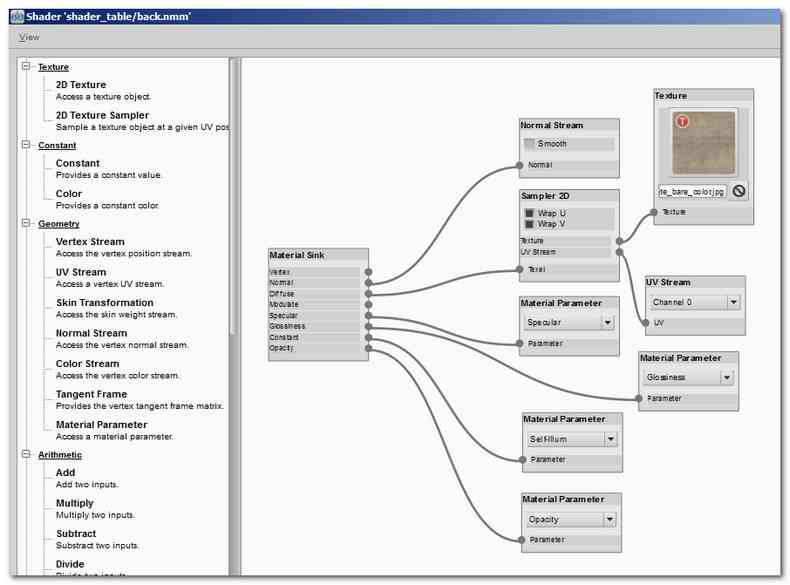 The main benefit of this abstract representation of a shader appears when it comes to port your project & assets to several platforms. No matter its complexity, a shader designed with the Shader Tree editor is fully portable. Each node is basic and independent from any kind of hardware implementation.

As a testbed, and to demonstrate how straightforward and powerful this Shader Tree editor can be, I spent half a day to design random materials. The result is shown below : 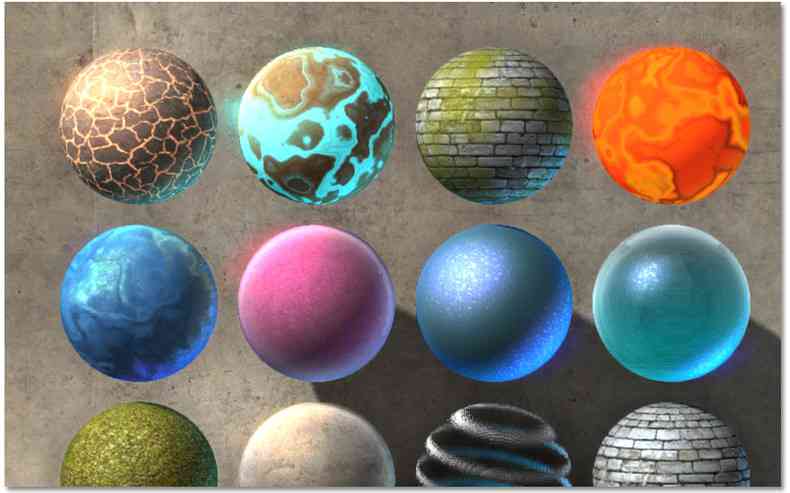 A grid of experiments with the shader tree.

One of the funny features is a clock node, that allows the user to inject a clock tick inside a shader. Use it to scroll your UV coordinates, to blend colors along time, and so on. Here’s a video capture showing various use of this feature :

The same thing in motion.

Here you are, boys & girls. Feel free to download the source file below, and enjoy !!!