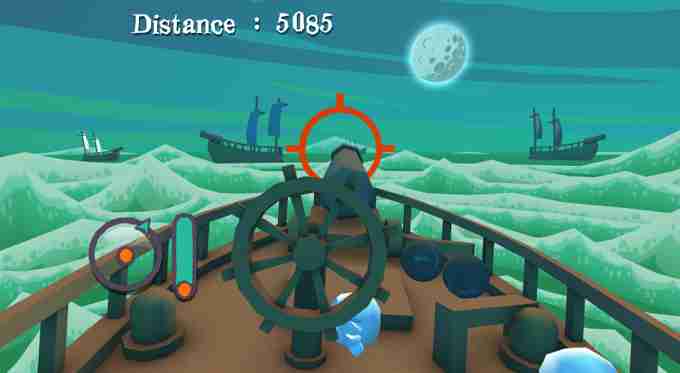 Recently, I became sort of addicted to the competitions organized on www.tigsource.com
Those are short contest (1 month), on various topics, aiming to create a game.

Some games are made with GameMaker, some in Java, some in Flash/AS, some with custom C++ engine, etc.

My contest entry depicts a ship’s cockpit, and more precisely, the Bridge Deck. The view is entirely in realtime 3D, including the cockpit.

All the visual assets in the game were modeled in a more or less accurate way, technically speaking, to focus on the immersion & visual appeal. Zelda Wind Waker was my main inspiration source.

I wrote my game with a friend’s engine, that covers all what it takes to create indie games. The engine was written in C++, but my game is enterely scripted.

The final delivery almost looks like a “game”, with interactivity, and stuff to do.

Now for a short sequence of credits : I did the visuals & scripting, Maf (maf464.free.fr) gave me some Amiga mods I could use, and Mazami Tanzi (www.tanzi.jp) did the (short) Japanese translation.

TO PLAY THE GAME, read below

I included all you need in the archive.

Choose your language with the left & right keys, select with [CTRL] or [SPACE].
Press spacebar on the title screen to launch the game.
In game controls : <- and -> to control the aim, CTRL to shoot boulders.
Destroy the ships on your route, bit hitting them with the boulders.
If you don’t destroy any of them, they will hold you back and you will never reach the island.
Use the compass to find the direction of the Island.